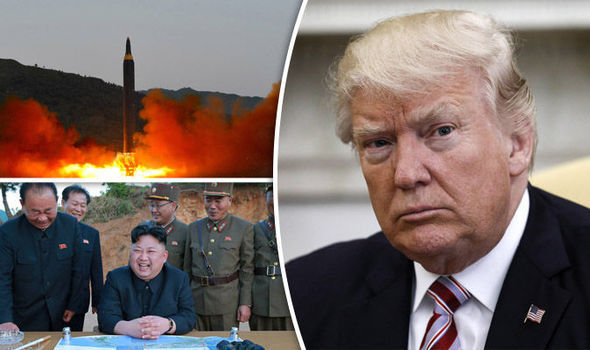 As against high expectations from President Trump’s long tour of Asia, there seems to be  no change in North Korea flash point except ‘Old’ and ‘Fat’ jibes. It appears that world community at large seems to be settling down with status quo approach, with some statements and posturing. Is the world finding itself helpless against danger of nuclear blackmail?

The use of nuclear capability as insurance for its defence, was cited as the main reason by every country, which added nuclear weapons to its armory, ever since it was invented. It spiraled into a competition, which came under some control after realization of its devastation in Japan, and potentials of mutually assured destruction (MAD). When Israel went nuclear, it developed a survival capability to dissuade all hostile neighboring Arab countries. The NPT required checking proliferation of nuclear weapon technology was selectively leaked by some irresponsible countries, leading to a situation where humanity suffers from a threat of nuclear blackmailing by states, as well as militants if tactical nukes accidently fall into their hand. Interestingly both countries accused of nuclear blackmailing happen to be ‘Frontline states of China.

When President Trump started his visit to Asia, after a series of provocative statements by US and North Korea, it was being speculated that some concrete action plan will emerge in his handling of North Korea. During this marathon visit, as President Trump came closer to reality, it is quite clear now that it will end with no worthwhile option on the table, except the efforts to outsource the problem to China again ,(which is also part of the problem) despite being disappointed earlier, with reasonable suspicion that it will not work.

North Korea has its own point of view for all its missiles/nuclear tests/ misadventures so far, which revolves around its own security concerns and survival of regime of Kim. It justifies it as a defensive measures against the backdrop of US threat of past regime changes efforts in Iraq, Afghanistan, Syria and other countries not following its dictate, as they happened to be Non nuclear/Incapable of threatening some part/colony of US. The threat from US regional allies has also been given as an excuse. The Korean War is also an unforgettable historical event when US might was used against them. The blackmailing part is that their leadership is ready to endanger lives of its own people, by continuing with nuclear tests, (despite the tunnel housing it collapsing), to save the current autocratic regime, using ‘Hate America’ theme as rallying point.  By doing so they expect that the world should behave on their terms to save lives of people of other countries, despite risk of suicidal destruction of their own country, like in case of fidayeen attacks. Sanctions had little effect to the extent that North Korea is now signaling to be ready to talk to US, but without preconditions.

The reality therefore is that by getting missile and nuclear technology from some country/countries who would have obviously violated NPT, North Korea has been able to create a capability which dissuades the strongest military power US (having all instruments of military deterrence) to take any military action.  It is also using its nuclear capability claims, to threaten Japan and South Korea and blackmail US to talk without preconditions.

Pakistan has also been using this Nuclear Blackmailing/Dissuasion Theory against India for quite some time. It acquired nuclear and missile capability from some country/countries, which must have violated NPT at that time, and the world community ignored it. Today Pakistan is hosting and training maximum number of terrorist organizations in the world. It blatantly launches proxy war against India through militants, and has been able to dissuade India to use its conventional capability to prevent it, by nuclear blackmail/ threat to use nukes. It has thus been able to prevent full use of hard power by India, against inhuman use of proxy war by militants on innocent people; hence this theory seems to be working.

It is surprising that the whole world rightly criticises North Korea, but not many are talking of Pakistani tactical nukes, despite the fact that the risk of tactical nuclear/dirty bomb sneaking to militants are much more from Pakistan. The stage is slowly setting in Pakistan, for the next level of terrorism with tactical nukes/dirty bombs. The danger of this technology passing into the hand of terrorists by coercion of scientists/security personals/ handlers, to share the technology and steal some fissile material, sufficient for mini nuke/ dirty bomb is not impossible in future. The Nuclear Security Summit held in US on 02 Apr 2016, exhibited grave concern of global powers, about the danger of mini nukes falling in hands of terrorist organisations. A possibility of Pakistan covertly passing the tactical nuclear technology/ dirty bomb to terrorists to explode it in India, as part of proxy war, and later deny it, is an option which cannot be ruled out, as its overt use by their Army may be difficult to be justified to the world community.

Despite best efforts a worthwhile solution to control unilateral missile and nuclear tests by North Korea has been found by World community, as the sanctions alone are unlikely to yield results, may be due to selective leakages. A status quo in this regard will render world helpless, and it will become a new normal. Surprisingly when newly elected Pakistani Prime Minister is talking of use of tactical nuclear weapons against India, not much criticism appeared on world media (perhaps many countries still feel that it is a local affair). Let me enumerate some of the implications of silent acceptance by global community of this ‘Nuclear Blackmailing Theory’ and terror/nuisance potential of both countries discussed earlier.

While large number of analysts may be convinced that North Korea is the biggest challenge in terms of Nuclear blackmailing, but in my opinion the bigger global challenge is yet to come in the form of tactical nukes/dirty bombs/biological and chemical weapons getting into the hands of terrorists. No country should assume that it’s safe forever from blackmailing by terrorists having acquired such capability, even if it appears fiction today.