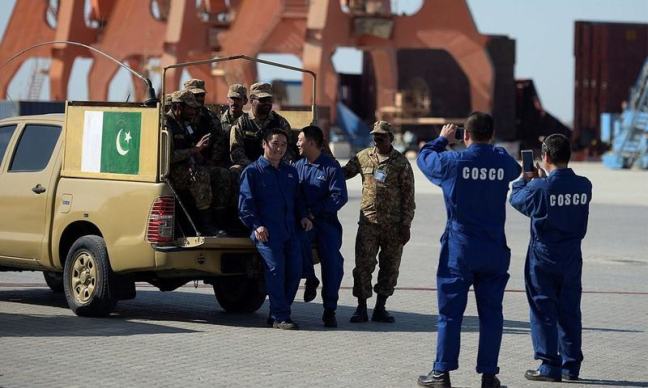 Pakistan has deployed 15,000-strong force for Chinese security, yet kidnapping of two Chinese workers is a cause of concern to them. If the trend continues ( which is quite possible because Taliban despite being nurtured by Pakistan, its faction TTP is targeting Pakistan Army, and ISIS is making inroads there) then its reasonable to assume that PLA may need to formally enter Pakistan to secure Chinese people working there. This a repeat of East India Company Model leading to Pakistan on its way to become a Chinese colony in future. Those in power in Pakistan including Pakistan Army may not mind it, so long the fund flow keeps coming to them, but the people of Pakistan edging towards debt trap and most importantly the Jihadist’s nurtured by Pakistan will certainly mind it as it disturbs their well established terror industry.
In this context I am sharing my published comments on South China Morning Post on the article “China ‘holding itself back’ by shying away from global terrorism fight”  by Catherine Wong, in context of ISIS threat. China is still ignoring the old common phrase that ‘ There are no good and bad terrorists’. All terrorists are same’ be it ISIS or JeM/LeT or ETIM, hence backing JeM chief, and appeasing some will not help. Realisation of it being a risky experiment will happen when Terrorism strikes the mainland, as it happened in case of US.
Gen Asthana
Readers are Invited to connect with author on Facebook, Linkedin and Twitter as Shashi Asthana
https://www.dawn.com/news/1341723 (photo)

China ‘holding itself back’ by shying away from global terrorism fight

I agree with the author that China can not Keep distancing itself from terror gaming of Pakistan if it wants CPEC to succeed. Although Pakistan claimed to have deployed 15,000-strong force for Chinese security, but kidnapping of Chinese in Pakistan soil has commenced. Later PLA may need to formally enter Pakistan to secure Chinese people working there. . Those in power in Pakistan including Pakistan Army may continue to put a false front so long the fund flow keeps coming to them, but the people and most importantly the Jihadi’s earlier nurtured by Pakistan but now working against them will certainly mind it as it disturbs their well established terror industry.
This will bring China into a new conflict arena risking their country exposed to Terrorism, a lesson which US learnt too late after going through the entire exercise, which China is just commencing. The Jihadist’s do not want to see any foreigners including Chinese. Although CPEC, edging US out of this strategic space may be too lucrative, but they are marred with the risk of terror attack in China, including mainland as it happened in case of US. Now China will have to take a call of fighting Terrorism or keep looking the other side till Terrorism strikes them.