Sharing with friends my article published in Indian Defence Review on 06 October 17,  News mobile on 05 October 17, Future Directions Initiative(Australia) and Borderless News and other publications after updation, in different forms, as the subject has new developments on daily basis. (Last updated on 07November 2017) 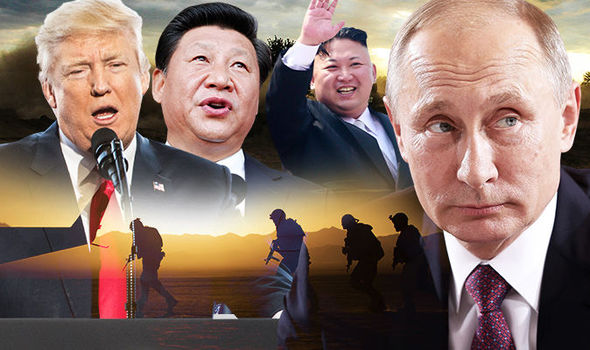 During recent verbal exchanges of provocative statements between US and North Korea, US has been maintaining that they have ‘All the options on the table’, while Kim continued with missile tests shocking Japan and South Korea.The idea of US to resolve the crisis through China did not work, which resulted in US giving indication during recent visit of Rex Tillerson to China that they may be trying for direct talks to North Korea in some manner? President Trumps indicator of “Not to waste time” on Kim, indicates that the options on the table are reducing at a very fast pace.Have the US strategic thinkers gone wrong all these years?

A similar question comes to mind of any strategic analyst regarding South China Sea also. China started incremental encroachment of various features in South China Sea, based on unilateral perception of its history, to convert them into islands and make South China Sea as Chinese lake, side-lining UNCLOS and ICA decisions. Nothing more than provocative statements and strategic and military posturing has been done so far.Today hardly any worthwhile options seem to be on the table. In this paper an analytical attempt is being made to wargame the options on US table on both scenarios.

Where did US and the World Community go Wrong?

It is difficult to believe that when the nuclear proliferation to North Korea took place, US did not know about it. It definitely needed a discussion in UN Security Council, even if some country having signed the NPT did it, or some scientist covertly passed on the papers/technology to North Korea. US and other major powers chose to look the other way, while it happened. North Korea continued to develop its arsenal, presumably with Chinese help, as both of them wanted to avoid a situation they faced during Korean War of 1950-1953. US regime changing actions in Iraq and Libya further strengthened the deep rooted resolve of North Korea that going nuclear is the only way for their regime survival. Now the situation is that US is in a deadlock in both the scenarios, struggling to find solution, as no worthwhile action was taken when the problems had started.

Option1:  North Korea under pressure of US threat and Sanctions strikes US base/Japan.  The option is suicidal and will definitely see an end of Kim’s regime besides destruction of North Korea, nullifying the basic cause for which he has been acting against the world opinion. The US and allies will also face grave damages. China will be forced to protect her interest and will face a decision dilemma to react militarily to protect its frontline state or otherwise. In case it chooses to react against US and allies, it may trigger a semi world war, the escalation dynamics of which will be difficult to control. I am sure that all concerned including Kim’s regime will like to avoid this escalation dynamics; hence this option is highly unlikely.

Option 2.  Status Quo prevails with both sides, along with increased sanctions, and US keeps trying for diplomatic negotiations through Track 2 diplomacy, without being seen to be compromising. It’s a likely option, at least for the time being, till President Trump visits Asia. A spoiler to this option could be some more nuclear/missile tests by North Korea. In light of “Not to waste time” advice of President Trump to his Secretary of State, there seems to some problem in pursuing this option. The anti-US rhetoric, in North Korea and its determination for regime survival is strong enough to withstand sanctions in near future. The sanctions alone therefore are not adequate to deter North Korea to give in to US demand of denuclearisation as a precondition for talks, even if China also implements the sanctions as agreed upon in UN, which is slightly doubtful as some leakages are expected by interested parties.

Option 3.  North Korea continues with the missile tests, it accidentally hits some part/ ship of US/its ally. US uses the incident as trigger and fires preponderance of conventional weapons like MOOB, to destroy North Korean nuclear facilities.The dangers of Option 1 are equally applicable in this case, but the likelihood is more than Option 1. A slight variation to this option is a preemptive conventional strike by US, but the population in Seoul, (which is too close to the border having large percentage of South Korean population) will have to be evacuated beyond North Korean artillery range to avoid casualties. The risk with this option is that any irresponsible action by North Korea, can lead to devastating escalation, which may be difficult to control. It is for this reason that South Korea seems does not want military action and seems to be getting softer with North Korea. South Korea seems to be contended with President Trump’s announcement of supplying them with latest surveillance systems. Japan seems to be putting a brave front of going along with military option as a last resort, although it is also concerned about their people in North Korean custody.

Option 4.  US mentally accepts that North Korea has become a nuclear state, and it’s too late to reverse its status, without declaring it and appearing to be blackmailed. This scenario coupled with ‘Protectionist tag’ of Trump’s regime may force Japan to go nuclear, despite its sentiments to the contrary because of past experience of Hiroshima. South Korea despite 64 years old ‘Mutual Defence Treaty’ with US, does not want war in Korean Peninsula. It is looking for better nuclear shield and technology, and may also want to have tactical nuclear arsenal from US. Unlike North Korea they may not be interested in strategic/longer range missiles, as their requirement is mainly defensive in nature .This may be of serious concern to China as well as Russia, e.g. they both opposed the deployment of THAAD. It is appreciated that this could have been one of the reasons for China and Russia to render support to UN Resolution against North Korea for stricter sanctions. This may not suit China very well, which was quite happy having a Frontline/buffer state between them and US ally along land borders. China also seems to be losing grip of North Korea to follow its advice, due to strong anti-US sentiments and efforts for regime survival, with or without China.

There can be other possible options and scenarios, but having discussed two extremes of the available options, few things emerge out quite clearly.

In case of South China Sea also, inadequate/delayed actions taken by US (As global power and ‘Net Security Provider’), all claimant countries, ASEAN, and the global community, the infrastructure built by China on features to convert them into islands is difficult to be reversed. The spate of provocative statements and military posturing between US and China in last few years has lost sheen.

The options available are to prevent further infrastructure build up, ensure Freedom of Navigation and flights, and use of global commons by all. China has not prevented any commercial shipping so far, hence the situation has not triggered to a flashpoint. The fact that China has not accepted ICA verdict and continues to treat occupied features in international waters as islands, there may be a tensed situation, if China starts treating South China Sea as ‘Chinese lake’ lays down some rules of business inconvenient to other users of SCS and global commons, and declares the airspace over it as its ADIZ, the freedom of flights over international waters will get affected adversely. In that case an immediate strategic response including fresh military posturing will become necessary, as it must be resisted to avoid helplessness later. The events like Malabar exercises may see some significance there. The cold war between US and China will continue despite being the largest trade partners, having very heavy economic dependence on each other. The efforts to woo smaller countries and ASEAN, and have various strategic alliances to rebalance each other will continue by both as an alternate strategy. For the time being their relationship may be declared as“Cooperation with Competition”,but in my opinion, it will be“Blow hot Blow cold”.

I do not visualise any major changes in both the scenarios for the time being. The indicators suggest that backdoor talks are being tried but “Not through China”, along-with show of strength like moving of US super carrier, bombers flying and night exercises with South Korea, in the region.  Tillersons assertion that “Diplomacy will continue until the first bomb is dropped”, further strengthen this assumption. Let us see what President Trump brings on the table during his impending visit to Asia. Let us keep guessing as to what is that ‘one thing’ as per President Trump, which will work in this crisis.

One thought on “North Korea and South China Sea Flash-points: Are worthwhile Options left on US Table?”