Helsinki summit has indirectly indicated that US and Russia are in no mood to confront on Syrian issue further. Earlier last week Syrian President Bashar al-Assad’s forces, backed by Russia  regained ground from the southern rebels, who had earlier chosen to move towards Golan Heights to create problems for Assad by bringing his troops close to the Israeli occupied Golan Heights. Russians held talks with Israelis to prevent clashes on Golan Heights, besides building pressure on rebels, which resulted in Syrian rebels reaching an agreement with government forces to leave the strategic area of Quneitra along the border with the Israeli-occupied Golan Heights and hand over medium to heavy weaponry. The agreement divides the rebels into two groups, leading to departure of terrorists who reject the settlement to Idlib, leaving behind the groups who accept the leadership of President Assad.

The conflict is yet to be over, with rebels holding some areas in Dera, Rawa and some pockets of Quneitra continue to face Syrian bombardment, some more killings, and events like one Syrian aircraft shot down by Israelis alleged to have entered their airspace. Threatened by advancing forces of the Syrian government in the south to clear pockets of resistance, hundreds of volunteers with the Syrian Civil Defence, also known as the White Helmets, and their families raised an alarm and were evacuated by Israel from Syria to Jordan overnight at the request of the United States and European countries to be transferred to UK, Canada and Germany later. The Russian president proactively used the Helsinki Summit to indicate the need for “normalisation” in Syria, and encouraging the return of refugees from neighbouring countries. He also offered the use of Russian aircrafts to deliver international humanitarian aid to those in need in Syria. It clearly indicates the Russian edge in Syria and relegation of US desire for regime change in Syria.

As a precursor to the latest situation, I am sharing newspaper coverage in Hindi Daily Newspaper Hindustan published at the peak of attacks by US and Syria. For the friends who do not understand Hindi, a transcript in English is placed below. 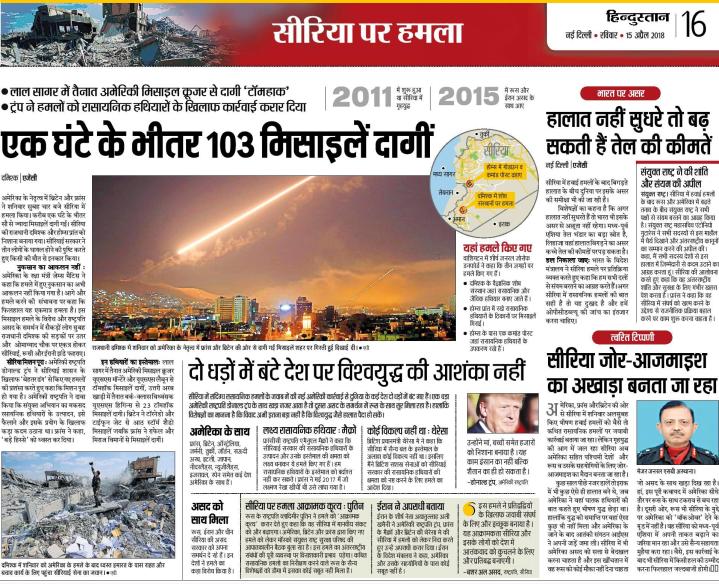 US Boils the Syrian Cauldron: A Dangerous Move

The US, UK and France launched strikes against targets at three sites in Syria in the early hours of 14 April 2018. All forms of media are flooded with the details of the attack, and many more details are still pouring in. The US claims that the strikes only targeted a scientific research center in greater Damascus involved in the development and production of chemical weapons, a chemical weapons storage facility West of Homs, and a chemical equipment storage facility. The aim being to demolish their capability of Chemical Warfare, something which US considers has the potential to be a game changer in US-Russia power equation. It however needs to be analysed whether the actions of US and its allies is to target chemical factories of Syria, or it has a much bigger messaging?

Every sane mind will possibly condemn the use of chemical weapons against innocent people, and will thoroughly condemn any country/group using the same. These have also been banned by United Nations through various conventions on the issue. At the same time violating sovereignty of any country to punish Syria for the alleged crime (which Syria and Russia deny), will continue to invite criticism. Earlier in history, US and its allies invaded Iraq on excuse of having piles of WMD. No worthwhile WMD arsenal was found after the war, but ISIS caliphate did emerge, once US withdrew, leaving the region totally destabilised. The trigger in leading to this attack could a possible threat of use chemical weapons against US soldiers operating there. These actions therefore give rise to many controversies arriving out of interests of various affected parties and other powers. Let me analyse few of them.

US and its Allies

US has been seeking regime change in Syria and want to push Assad out of power, and Russia out of the region, before they pull out from Syria. Their troops need to be there till this aim is achieved. Their allies like Israel also do not want Russians to be anywhere in this region. This attack can be an excuse to signal it strongly. The US and its allies do not want a direct confrontation with Russia and have tried to take adequate precautions to avoid it, notwithstanding the provocative speeches of President Trump. It is claimed by allies that Russians were informed and the US missiles avoided Russians to prevent direct confrontation with Russia. The aircrafts used did not enter Syrian airspace to avoid being shot down by Syrians /Russians.

Russians are unlikely to stop supporting Assad, if they need to be in this region. Their warning for retaliation may not see an immediate action, because US has taken some precautions about it, but the cold war will definitely become hotter. Syria is the only ally in this region for them, and Russians are not going to give a walk over to US, because some missiles have hit Syrian establishments. They have made huge strategic and military investments in Syria, which they will not like to dump it. This action will also push Russia closer to China and possibly Iran (on regional platform).

The Syrian Government continues to deny the use of chemical weapons based on simple logic that they were on the verge of victory against anti national elements, and had already surrounded them, hence they had no compulsion to resort to such inhuman activity. They claim that attacks by US and allies have killed large number of innocent civilians (the numbers are uncertain so far), and has taken them away from road to peace, when they were almost there. It also claims to have destroyed a large number of US missiles. I think Syria has more resilience to withstand casualties, therefore the attack may not have taught any worthwhile lesson to Syria as claimed by US.

China and Other Countries

Chinese while maintaining a low profile in the issue, and passing the buck to UNSC, have shown solace to Russia and Syria by criticizing  military action of US by circumventing the Security Council is inconsistent with the principles and purposes of the UN Charter and have emhasised that Syria’s sovereignty, independence, unity and territorial integrity should be respected. This also helps North Korean argument, when Kim says that US would force regime change, if it does not have nukes or the capabilities to hit mainland.  It will be premature to say whether these attacks will be able to avoid chemical weapons or will push the region in much more unstable situation. Turkey has welcomed the strikes in context of alleged chemical attacks in Duma few days back by Assad regime.

The decision to attack Syria is unlikely to bring peace in Syria or protect innocents, as it may well happen that there may be more casualties in attack than what Syria suffered by alleged chemical attack. How good the decision of President Trump to do so has been will be known in next few days. As of now it is yet to be debated in US Congress, and even some US Congress members have serious apprehensions about it. These attacks however bring happy news for all terrorist groups operating in Syria that their opponents despite being responsible countries are busy fighting each other for their own reasons. I do not think that any of these responsible nations are giving any hope to innocents being killed on ground by one way or the other.

(The views are of the author and do not represent views of any organization. The author can be reached as Shashi Asthana on Facebook, LinkedIn, Youtube and Google+, asasthana_shashi on Twitter and on website https://asthanawrites.org/ )