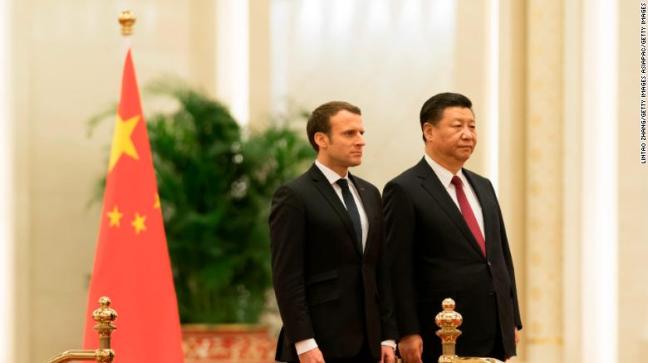 Chinese efforts to make best of  French President Macron’s  visit to China, as success of  Belt and Road Initiative (BRI), recently enshrined in the constitution, have not been bought by the West. Macron has been balanced in choosing his words to say “I want us to define together the rules of a balanced relationship in which everyone will win,” . Referring specifically to China’s “Belt and Road Initiative” to revive Silk Road trade routes, he said “the ancient Silk Roads were never only Chinese” and also “the new roads cannot only go one way”.  It indicates that it can not be only China centric with bulk of contracts going to Chinese companies to revive their downsliding economy.  The entire EU may not  be on the same page as French President on BRI as many countries in EU see this $1 trillion BRI  as an example of Chinese expansionism and the proposed deals lacking transparency and level playing field, highly skewed in favor of China.

From the conception of One Belt One Road (OBOR) later published as BRI document,  it was quite clear that the BRI project has been conceived by China, to improve its connectivity with four continents to increase its infrastructure investments, utilise it’s over-capacities and trade surpluses, besides increasing its strategic footprints globally. It is a ‘China First’ programme without calling it so. China planned to organised OBOR Summit last year, expecting attendance of all global leaders, but when it was clear that the world will not sign on the dotted line of China, and most top leaders will not attend, it was renamed as Belt and Road Forum(BRF).

BRI is also a tool for creating connectivity for Chinese global deployabity to be able to take a global leader role. China wants the world to believe that it is a benign project for inclusive growth of partners, but the idea has been bought by only those countries which need Chinese capital or other support. Some others who can not oppose China for varying reasons have also followed it because of lack of choices. The countries which joined were helpless due to need for capital to make infrastructure in their country, as they were short of it, most of them now realise that it was exploitative. The problem still remains that who will provide the capital for such a fancy one sided project conceived for China’s economic survival and global leadership ambition? The European countries realise that with major contracts planned for Chinese companies, it is not a win-win project but only a China- win project.

India boycotted BRF because China-Pakistan-Economic-Corridor (CPEC), (part of BRI) passes through Pakistan occupied Kashmir (PoK), which is sovereign territory of India violates Indian sovereignty. No other country is confronted with an issue as serious as “sovereignty issue” in context of BRI as India, hence, India was well justified. Moreover it is wishful thinking that militants harboured in Pakistan will ever allow our trade to pass through to CAR/Afghanistan. In case of Bangladesh-China-India-Myanmar (BCIM), India has already established connectivity through Bangladesh from Kolkata to Agartala.  The roads in Northeastern states are being developed by India, and connectivity to Myanmar is being developed bilaterally, hence China driven BCIM has very little to charm India.

I feel that Chinese advertisement of Macron’s support to BRI is part of popularising it. On Macron’s part it is part of diplomatic niceties, the depth of which will be known only when contracts pertaining to BRI are inked.

(The views are of the author and do not represent views of any organization. The author can be reached as Shashi Asthana on Facebook, LinkedIn, Twitter and Google+ and on website http://www.asthanawrites.org)