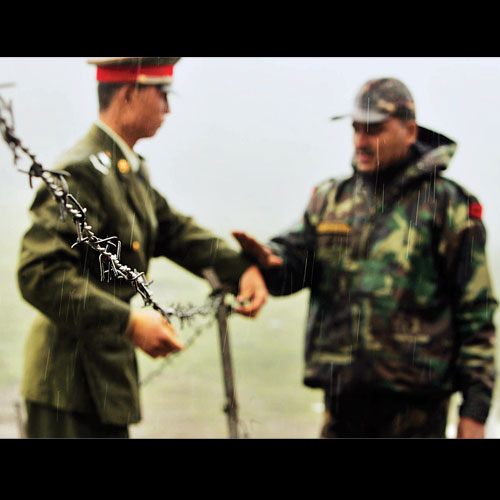 I am sharing with Friends the Yesterdays original article on globaltimes.cn as editorial, and other one in Peoples Daily as “Patience has bottom-line” which is provocative, and can be treated as part of psychological warfare and also to amuse Chinese population. Below that are placed my comments given on Global Times.

I am also sharing the URL of some of my older comments placed in my profile on Global times on such provocative articles earlier.

The Chinese foreign and defense ministries have released statements on the illegal trespass of Indian troops into Chinese territory, vowing to take all necessary measures to make India withdraw its troops unconditionally.

China’s stance has always been clear, which is that the standoff is taking place in Chinese territory, as the border was clearly defined by the 1890 Convention between Great Britain and China Relating to Sikkim and Tibet.

India is concerned that the road China was building in Doklam might threaten the security of the Siliguri Corridor, but does that justify Indian troops’ incursion into another country in utter disregard of international treaties?

India is publicly challenging a country that is far superior in strength. India’s recklessness has shocked Chinese. Maybe its regional hegemonism in South Asia and the Western media comments have blinded New Delhi into believing that it can treat a giant to its north in the way it bullies other South Asian countries.

Over the past month, the People’s Liberation Army (PLA) has been on the move. We believe that the PLA has made sufficient preparation for military confrontation.

It is a war with an obvious result. The government of Prime Minister Narendra Modi should be aware of the PLA’s overwhelming firepower and logistics. Indian border troops are no rival to PLA field forces. If a war spreads, the PLA is perfectly capable of annihilating all Indian troops in the border region.

So why hasn’t the PLA started? China cherishes the decade-long peace on the border and wishes not to break it. We want to give peace a chance and allow India to recognize the grave consequences.

The Modi government’s hard-line stance is sustained by neither laws nor strength. This administration is recklessly breaking international norms and jeopardizing India’s national pride and peaceful development.

Its move is irresponsible to regional security and is gambling against India’s destiny and its people’s well-being. If the Modi government refuses to stop, it will push its country into a war that India has no power to control.

China has exercised great restraint, demonstrating respect to peace and human life. The PLA did not strike in the past month when Indian troops savagely trespassed into Chinese territory. If the Modi government takes China’s goodwill for weakness, its recklessness will only lead to devastation.

The Editorial talks of 1890 Treaty, but doesn’t mention about 2012, when it was decided that noone will change the status Quo unilaterally. The road construction is perceived by India as breach of the agreement, hence the stand-off.

I don’t think China or India want war, and both are committed to peaceful growth of respective countries, but none can be deterred by other to modify its strategic independence.While it’s good for any country to have confidence on its Armed Forces as indicated in the editorial, but being overconfident, is risky and may lead to loss of face, as it happened in 1979. As military analyst, I can say that combat strength should not be measured in numbers, but the terrain, deployabity, commitments elsewhere, operational experience, and determination of opponent are also factors worth consideration before advertising confidence.War doesn’t suit anybody. Diplomatic consultations without preconditions is the answer. While it is easy to understand that domestic compulsions and forthcoming elections are discomforting China with present state of stand-off, resulting in so many provocative statements in quick succession. Psychological campaign, propaganda war is unlikely to deter a country like India. If US has not been able to deter North Korea, China could not deter Vietnam, it may not be practical/reality for China to deter a determined India. Any conflict resulting into stalemate and loss of face may not be good for CPC or China at this juncture, when standoff at South China Sea is yet to be resolved. I am sure the ideas of editorial need more deliberation.Shashi Asthana