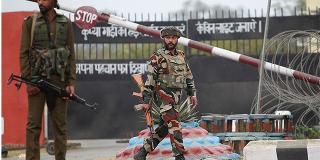 For the past few days, so many personalities, who have never been close to bullets spray, including few Veterans have been passing judgment and pulling down the morale of the Army, without understanding the dynamics of terrorist strikes. If Army was to go by their advice and   TV debates, all military garrisons need to be converted into impenetrable fortresses, and Army should first be protecting themselves. But this is not what we teach our young generation. They have an honorable task to protect the nation and its people; hence troops have to move out to fight militants and adversaries, taking certain amount of risk. With inadequacy of manpower and security resources, certain gaps in own securities are unavoidable in certain areas. Let’s also be fair to our troops, for not being able to provide the best of security arrangements like lasers and other modern sensor devices, and have to locate them as per the overall plan of security of the nation and population, and not to seek their own security, in large No of cases when it’s unavoidable, because for the Army the “Nation comes first always and every time”. Moreover can we afford to make a fortress around every public place/school/civil colony/ Government Office, which can easily be attacked by terrorists? If we keep attempting this, are we not playing into the hands of the adversary?

In a democracy the healthy criticism is always welcomed, but people who criticise need to be balanced, and backed by knowledge of the subject to be meaningful. While there are lessons to be learnt, due to the fact that militants penetrated so deep, and were able to get adverse casualty ratio in their favor, but how can we forget that it was just raw courage of young officers and men willing to stand in line of fire to save their fellow comrades and families, that a major embarrassment to the nation and the Army has been averted. No hostages were allowed to be taken. It was due to swift reaction of troops, that the terrorists were contained into one location and couldn’t go door to door killing family members just the way they did during Mumbai attacks. We need to understand that in Indian Army the officers to men casualty ratio is one of the highest in the world, hence we have more officers casualties, because officers lead from the front, giving an example of its professionalism, of which, every Indian should be proud of.

Historically, any military force which went into fortress mentality, found it difficult to come out of it to fight offensive battle, hence our forces should never be pushed to such mentality, due to rhetoric or non professional pressures. Already enough pressure has been mounted on the Army by forcing them to fight without AFSPA in certain cases, and overgrowing demands of withdrawal of the same, resulting into hesitancy in sentry to fire on suspected militant, knowing that if he turns out to be innocent, the soldier will find himself in jail. This definitely gives advantage to the militant, by dressing himself in uniform. The decision makers also need to think that if over decades, they keep reducing the status of the Army, their pay and allowances and legal powers, then what kind of youth, they will be attracting into the Army (Which is the instrument of Last Resort) in times to come?

The nation needs to have confidence that Army will take care of its lessons learnt, faster than anyone else, and needs no ‘Updesh’ from non professionals. The most discouraging for the Army is politicisation of such incidences, including a recent Army exercise. Are we really addressing the root causes helping proxy war like poor governance, Article 370, local support to militants, better equipment and intelligence to troops and many more such measures, which the preachers were expected to undertake/ review, to ensure that Army is not sucked into internal security and is fully prepared to respond across LC/IB . As a country to fight proxy war propagated by a neighbour, we need to be prepared to take some losses, without losing patience and balance, and the decision makers along with military need to think through the next steps in escalation ladder and befitting response in all domains, recalling teachings of Chanakya once again, and there are enough options available in all domains, including military options short of declaring war.

Professionals, who have studied 1971 War, would know that we did suffer some reverses in between, but there was no TRP type criticism, and political scoring and lastly we proved an unprecedented victory to the world . The nation has to be prepared to fight an unavoidable proxy war, which may be long drawn, not with a short term perspective, but by standing with the Army and supporting it in long term (Refer link attached). Let us salute the martyrs, appreciate the positives, and move ahead boldly to teach a lesson to the adversaries.

2 thoughts on “Nagrota Incident and Aftermath: Prognosis from Military Perspective”