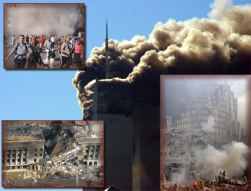 Before the 9/11 terrorist attack, a global power like US and Western world would have never imagined that an insignificant entity like al- Qaeda could attack mighty US, announcing terrorism as a dangerous kind of warfare, despite countries like India repeatedly drawing attention to its dangerousness in UN and other forums, about such threat emerging from Pakistan. A Q Khan, after proliferating nuclear technology became a national hero, in Pakistan. With no global power putting any pressure on them, the stage is slowly setting in Pakistan, for the next level of terrorism with tactical nuclear weapons. The danger of this technology passing into the hand of terrorists by coercion of handlers by terrorists, or as a deliberate move in absence of options by Pakistan, is no more a fiction, and may turn into a reality soon. Let me explain the basis for saying so.

Pakistan is growing its nuclear arsenal at a very fast pace, especially the tactical nuclear weapons/ mini nukes. In the terror industry nurtured by them, a number of terror groups have gone against the establishment, and are repeatedly attacking them. There is a serious competition in terror groups like ISIS, al-Qaeda, Taliban and few more to increase their influence, grab more power and money, a bulk of which comes from coercion all over the world. They are also looking for nuclear technology and fissile material. Coercion of scientists/security personals/ handlers, to share the technology and steal some fissile material, sufficient for mini nuke/ dirty bomb is not impossible in future. Pakistan’s assurances of its security cannot be relied upon, after all US found Osama bin Laden well protected on their soil, after searching him all over. The Nuclear Security Summit held in US on 02 Apr 2016, exhibited grave concern of global powers, about the danger of mini nukes falling in hands of terrorist organisations.

On 28th October 16, after attack by militants in Uri, which triggered the sentiments in India growing high to punish the militants, Pakistan Defence Minister Khawaja Muhammad Asif, in an interview to Pakistani TV channel SAMAA, threatened to unleash nukes against India, if their safety is threatened and to annihilate India. For decades Pakistan has been threatening India that if it crosses LoC/IB, they will use tactical nuclear weapons, trying to dissuade India away from exercising conventional option to control the proxy war and terrorist strikes propagated by them, thereby developing a false sense of security. The successful surgical strikes on “Terrorists  and their supporters” by Indian Armed Forces, demonstrated the National Intention, Will, and Capacity to exercise hard power, breaking the myth that India will not chase militants and their supporters acrossLoC/IB due to nuclear hangover.

Once the LC was crossed, Pakistan had no choice but to go on denial mode, to prevent loss of face as the converse would prove to their people that the nuclear threat was a bogey call, and India will use conventional power, whenever the threshold of her capacity of tolerance is crossed. With no one in the world in support of nuclear strike, and signals of restraints coming from coming from everywhere, Pakistan realized the futility of repeated nuclear threats and blackmailing of India, did a full U turn and on 08 October 16, with Pakistan’s High Commissioner to India Abdul Basit tells theTimes of India “To even think of a nuclear attack is suicidal”.

The problem does not end here. Knowing fully well, that with better economic power India will continue to remain ahead of her in conventional military power, a possibility of Pakistan covertly passing the tactical nuclear technology/ dirty bomb to terrorists to explode it in India, as part of proxy war, and later denying it, is an option which cannot be ruled out, as its use by their Army may be difficult to justify to the world community. It is well known that in terror industry, the terrorist groups do share intelligence, resources, technology and training camps, whenever it suits their mutual interest. Under such circumstances, a mini nuke/dirty bomb getting passed over to any of the terrorist groups, once it’s out of protected zone is a global threat, which can be a reality, once Pakistan runs out of other options.

Under the above circumstances no country in the world can claim to be immune from this newly emerging threat, including US and China, through militant organizations like IS, al-Qaeda, and Uyghur militants, because none of the militant organizations (notwithstanding the policy of appeasing some of them by global/regional players), want any foreign elements in Pakistan to disturb their Jihadi monopolistic industry. They also get support from some radicalised elements of Pakistani establishment. The sleeper cells all over the world, the growing diaspora and intermingling of population, makes them vulnerable to coercion and allurements, can extend the threat to Washington/Beijing/ New Delhi or elsewhere.

Pakistani tactical nuclear weapon arsenal continues to grow and all global players choose to look the other side presuming it to be an India-Pakistan issue. In fact some powers despite signing NPT continue to help them. When the global players felt that Iran’s nuclear program is going a dangerous way, sanctions were imposed. The world powers claim to unite to check the nuclear threat posed by North Korea. It is difficult to understand as to why there is no such check on Pakistan by any world player. It is a wake up call for world community to react, before it is too late.