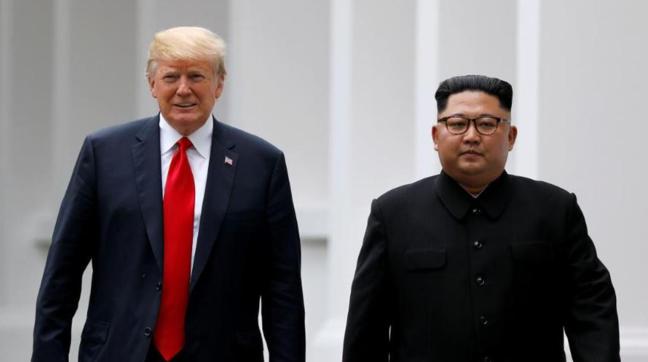 The Trump Kim Summit at Hanoi last month was destined to fail due to uncompromising stands of both parties.  The Washington Post report of  March 06, 2019 suggests that the rebuilding work at the ­Sohae Satellite Launching Station started either just before or immediately after the breakdown of a summit meeting between President Trump and North Korean leader Kim Jong Un in Hanoi on Feb. 28. that  as per interpretation of  satellite imagery.

Both sides have dug their heels and US is determined not to give any relief to North Korea from the economic sanctions that have been imposed on them, and may be looking to up the ante in economic terms, while North Korea may be looking to increase its leverage by going ahead with the nuclear and missile developments, which in their wisdom has been the main factor for its regime survival and making President Trump talk to him twice.

In this context I am sharing my opinion/editorial published 15 days before the Summit predicting the outcome exactly in the manner as it happened.

While South Korea has every reason to be hopeful about the upcoming summit of President Trump with North Korean leader Kim Jong-un in Hanoi scheduled for February 27 and 28th this year, looking for a peaceful nuclear free Korean Peninsula, but with inadequate signs of North Korean activities towards denuclearization and all US sanctions in place, the global pulse is that it seems to be impractical. Despite doing all the hard work for getting them together at Singapore, South Korea would have realized that nothing worthwhile progressed beyond optics of a successful break through. In the meantime South Korea had to do a remarkable balancing act of improving the relations with North Korea displaying Korean Sentiments with one flag participation in Winter Olympics and commencing rail and road links on one hand  and signing the revised Special Measures Agreement (SMA) with US.It stipulates a cost-sharing for the U.S. Forces Korea (USFK) resulting South Korea paying 1.04 trillion won (925 million U.S. dollars) this year (An increase of 8.2 percent over last year for 28,500 US Troops stationed there along with equipment.

President Trump in a speech earlier this month had announced the Summit with hopes of compliance of Singapore understanding by North Korea. US Secretary of State Mike Pompeo had earlier reiterated that sanctions will remain until Pyongyang carries out the complete verifiable denuclearization commitments made in Singapore. US is unlikely to settle down peacefully unless the threat to its mainland is eliminated. President Trump is also carrying a baggage of promise to do something, which his predecessors could not do with North Korea; hence with full awareness of reality he may not pitch high hopes, but will have face saving negotiations ready with good optics, if he fails to achive something better.

North Korea on the other hand had been pursuing a “byungjin” policy of simultaneously developing its nuclear capabilities alongside the economy. With seemingly impractical promises made by North Korea in Singapore to get immediate relief from tough US sanctions, it stands disappointed as it’s smart move did not work. In November 2018 it warned US that it will “seriously” consider returning to its erstwhile state policy of building nuclear weapons, if US does not end tough economic sanctions against it. North Korea is unlikely to take a gamble to give away its only strategic leverage, after witnessing the fate of Iraq, Libya and recently Iran.  Kim is unlikely to strip himself of the power which made US President talk to him twice. His acts can be seen as nuclear blackmail by global community, but it is a feather in the cap of Kim which makes him taller in domestic as well as global arena. UN reports also indicate that no worthwhile denuclearization has happened in North Korea.

Expectations of Other Key Players

South Korea will be genuinely looking for peace, as Seoul is within reach of conventional weapons of North Korea. Besides nuclear free Korean Peninsula it suits South Korea to have an economically prosperous North Korea. Its gesture to re-commence rail and road transportation between North and South Korea justifies the desire for better relations.China may not necessarily be too happy with Korean bonhomie and if US obliges (Although chances are remote) a US aligned peaceful Korean Peninsula. China will never like the buffer between its mainland and US Forces in South Korea to go away and Kim to be stripped of all nukes.On the other hand, it will also not like to invite THAAD too close to its borders, more so with ongoing trade war with US and relative strategic unease in context of South China Sea and Taiwan. China however made a smart move by unilaterally commencing logistics support and trade with North Korea.Japan will continue to be skeptical of North Korea with the threat it poses to it, will continue to feel insecure with unresolved East China Sea disputes and wavering stance of US; hence may be seen to be doing some balancing acts despite remaining an ally of US. The Russian concerns will be no different than Chinese regarding the development of THAAD. For any lasting solution China, Japan and Russia will have to be taken on board as the issue has crossed the limit of being a bilateral issue.

Will the Summit Succeed?

In diplomatic circles, no summit ever fails because minimum it can achieve is develop better understanding and plan for further negotiations. Having lost majority in Senate, President Trump will have to address the foreign policy issues to convince his voters for next Presidential elections that he tried his best. US Defense Intelligence Agency report suggests that Iran and North Korea pose an increasing challenge to US in space as both countries have developed jamming capabilities, which can also add to the agenda of Summit.As a strategic analyst, I do not expect anything concrete coming out of the Summit which can amuse the affected parties or the global community, except diplomatic niceties to lower temperatures, but both parties will claim it to be a success. The fact that President Trump is meeting Kim Jong-un again means that nuclear blackmailing works and it makes sense for any country to be nuclear to ensure its safety. I will not be surprised if Iran, Japan and Saudi Arabia start thinking on these lines. Indians will have to keep their antenna up regarding any possible missile proliferation to Pakistan, which is looking for such technology, after success of its Agni and Arihant programs of India. Expectations notwithstanding, it will be a summit which shows the priority of Trump Administration, and perhaps some signaling to China, by holding  it in Chinese backyard with one of its closest allies, without direct participation of South Korea, China, Japan and Russia. This is being done at a time, when the duration of truce in Trade War between US and China is shrinking.

(The views expressed are personal views of the author, and do not represent views of any organization; hence retains the copy right. Major General S B Asthana can be reached as Shashi Asthana on Facebook, LinkedIn, and Google+, asthana_shashi on Twitter and S B Asthana on Youtube. website http://www.asthanawrites.org)

The URLs of some of my publications on the subject are given below:-